2011-2015 Mini Cooper S Turbocharger Assembly w/ Manifold. Removed from a 2012 Mini Cooper S R56 Hatchback with 97k miles. This will fit 2011+ Post LCI Mini Cooper S model equipped with the N18 Turbocharged engine. Will NOT fit base Cooper or John Cooper Works models. In good working condition, fully tested prior to removal from a running and driving vehicle. Turbocharger spins smoothly with no excessive play or movement in the compressor wheel or internal shaft assembly. Turbocharger showed no signs of oil or fluid leaks during operation. Manifold is in good physical condition with no major cracks or damage. There is some typical surface rusting and corrosion on some surfaces. Includes everything as shown in the photos. You will need to reuse some of your existing hardware for installation. 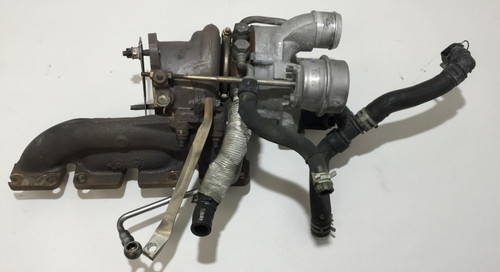