2002-2006 Mini Cooper Chrome Power Side Mirrors. Includes the driver and passenger side mirrors as shown. Removed from a 2005 Mini Cooper S R52 Convertible equipped Chrome housings as shown. These will fit 2002-2006 R50 Mini Cooper Hatchback and 2002-2006 R53 Mini Cooper S Hatchback models. Will also fit 2005-2008 R52 Mini Cooper Convertible models. This vehicle was not equipped with heated lens or auto folding functions. Please verify the 3 pin connector on the base of the mirror matches your existing unit prior to purchase. The housing is in good physical condition, has not been hit or bent in any way. The chrome finish is in good overall condition with no major hazing or pitting. There is some light scratches, marks, and imperfections which may be difficult to see in the photos. The plastic trim surrounding the lens has some scratches and fading as well. The lens is in good condition as well with no cracks or damage. Includes everything as shown, you will need to reuse some of your existing hardware for installation. 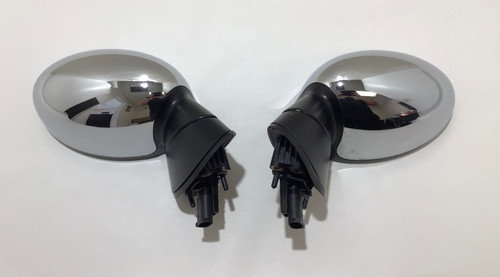