2008-2013 BMW 128i 135i Passenger Front Knee Assembly. Includes the passenger front knuckle, wheel hub, front control arm, and lower control arm as shown. In good physical condition, has not been hit or damaged. Wheel hub spins smoothly with no major play in the bearing. There is some typical surface rusting and cosmetic wear from normal use. The rubber bushings have some light wear, however the rubber is free of any major cracking or tears. Includes everything as shown, you may need to reuse some of your existing hardware and components for installation. Will fit any 08-13 128i / 135i coupe or convertible model. 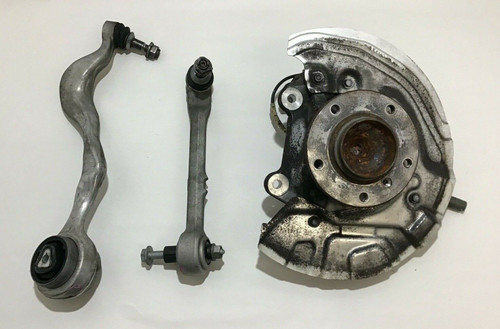