2005-2011 Mercedes Benz SLK Passenger Side Bi-Xenon Headlight. Removed from a 2008 Mercedes Benz SLK280 Edition 10. Will fit any 05-11 SLK280, SLK300, SLK350 or SLK55 AMG equipped with the Bi-Xenon lights from the factory. Will NOT fit halogen light equipped vehicles. In good working condition, fully tested prior to removal from the vehicle. Can be seen fully lit up in the photos. Headlight lens is in good overall condition with no major cracks. However the plastic finish has some typical light surface scratching and hazing beginning to form along the upper edge, which may be difficult to see in the photos. Housing is in good overall condition with no major cracks or leaks. There is one mounting tab on the upper edge that may need to be repaired for a secure installation in the vehicle. The wiring inside the headlight has some typical cracking in the rubber loom, which is a common issue on these light as they age. You may need to reuse some of your existing hardware for installation. Please verify this light and connector match your existing lights prior to purchase. Will ONLY fit models equipped with the HID BI-Xenon lights from the factory.

** This light is being sold as is, for parts or refurbishing purposes, due to a single damaged mounting tab, as shown in the photos. The upper mounting post was slightly damaged, however the majority of the tab is still intact, so it can still be used to mount the headlight with some reinforcement to the plastic. ** 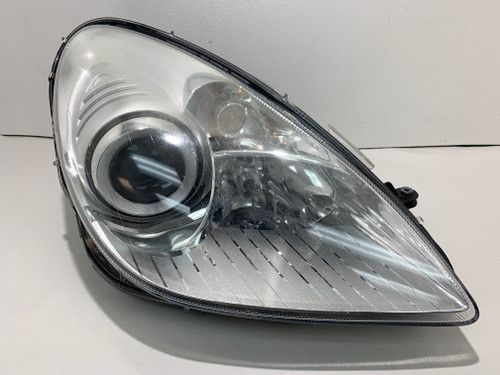