2007-2015 Mini Cooper Drivger Front Spindle Hub & Lower Control Arm. Removed from a 2012 Mini Cooper S R56. The spindle is in good physical condition, has not been hit or bent in any way. The bearing spins smoothly with no major wobbles or odd noises. The dust shield does have some slight bending, and surface rusting as shown. The hub does have some surface rusting as shown. The lower control arm is in good condition as well, however there are some scrapes on the underside due to the vehicle being lifted by a forklift. The lollipop bushings is in good usable condition with no major play, however there is some slight cracks beginning to form. Includes everything as shown, you will need to reuse some of your existing hardware for installation. 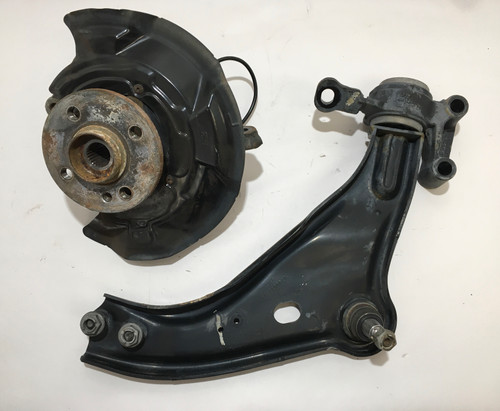