2011-2015 Mini Cooper Steering Wheel. Removed from a 2011 Mini Cooper S R55 Clubman equipped with the black leather 3 spoke sport steering wheel and a manual transmission. Will only fit manual transmission vehicles, will NOT fit automatic transmission vehicles. In good physical condition, has not been hit or bent in any way. The leather is in good condition with no rips or tears, there is however some wear on the bottom side of the wheel as shown. The red stitching is fully intact with no tearing or fraying. This wheel has the matte black trim inserts, which were offered on 2011+ LCI models. All controls are in good working condition, fully tested prior to removal from the vehicle. These trims do have some heavier wear and fading, as shown in the photos. Does not include the driver side airbag. You will need to reuse some of your existing hardware for installation. 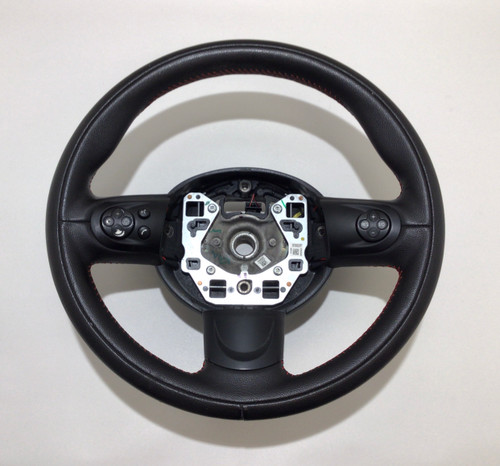