2007-2010 Mini Cooper S Turbocharger Assembly Manifold. Removed from a 2010 Mini Cooper S R56 with 97k miles. Will only fit Cooper S models with the N14 1.6l turbocharged engine. Will NOT fit base Cooper or John Cooper Works models. This unit is being sold as-is for parts or not working due to have some oil leaking during opertion. This leak was internal, causing some light smoking under higher rev's. We also found some light in and out play on both sides of the turbo. The blades do not appear to have contacted the inside walls of the housing when running the vehicle. The manifold and housing have some really heavy surface rusting and corrosion as shown. The manifold is in good usable condition with no cracks or damage. Includes the heat shields as shown in the photos. You will need to reuse some of your existing hardware and lines for installation. We suggest having this turbocharger professionally rebuilt prior to installation. 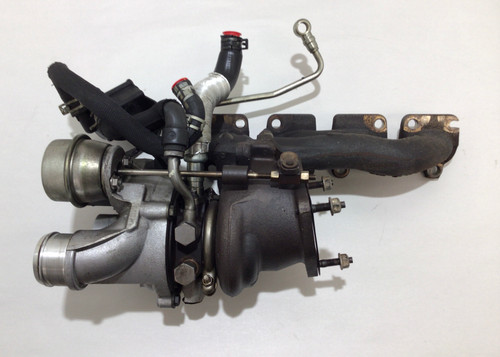