2007-2010 Mini Cooper Sport Leather 3 Spoke Steering Wheel w/ Airbag. Removed from a 2008 Mini Cooper S R56 Hatchback. Includes the leather wrapped steering wheel with media controls and driver airbag as shown. In good physical condition, has not been hit or bent in any way. Leather is free of any major rips or tears. There is some light cosmetic wear in the finish from normal use, there is however some scuffs on the bottom of the wheel, as shown. Airbag is is in good usable condition, has not been previously deployed. Includes everything as shown in the photos. You may need to reuse some of your existing hardware for installation. This was removed from a 2008 Pre-LCI model with the silver painted interior trim. This wheel and airbag will still be functional in 2011+ post-LCI models however the trim trim will not match. 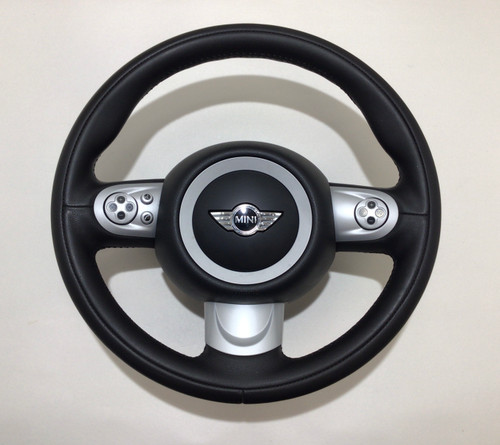