2008-2014 Mini Cooper S R55 Clubman Exhaust Muffler Tips. This is both the driver and passenger side muffler canisters and tips. Removed from a 2009 Mini Cooper S R55 Clubman with 96k miles. In good physical condition, have not been hit or damaged in any way. There is some typical surface rusting on the pipe itself, as shown in the photos. There is some cosmetic wear and discoloration on the tips. These were cut behind the muffler as shown. You will need to have a professional exhaust shop weld these to your existing, factory exhaust piping. Will ONLY fit 2008-2014 Mini Cooper S R55 Clubman with the separated dual exit exhaust. Includes the exhaust hangars and rubber mounts, you will need to reuse some of your existing hardware ware for installation. 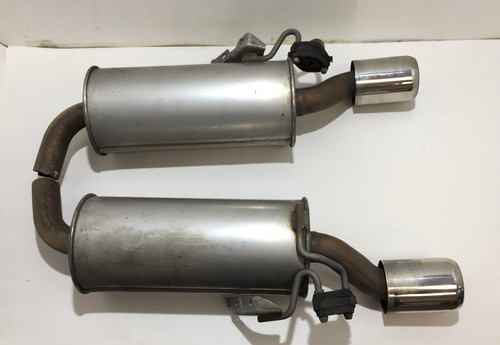